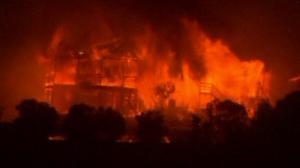 10 Luglio 2017 alle 23:36 CLIMATE CENTRAL Protezione Civile » Cronaca
Scientists have confirmed that human-caused climate change played an important role in the excessively-high temperatures that gripped much of Western Europe in June. The month of June was marked by extremely-high temperatures and wildfires across Western Europe. In Portugal, a deadly forest fire killed at least 64 people and injured more than 200. A major forest fire in Spain forced more than 1,500 people from lodgings.


In France, Switzerland and the Netherlands heat wave plans were triggered. England observed its hottest June day since the legendary heat wave summer of 1976.

Climate change made the intensity and frequency of such extreme heat at least twice as likely in Belgium, at least four times as likely in France, Switzerland, the Netherlands, and central England and at least 10 times as likely in Portugal and Spain, according to a new analysis by scientists with World Weather Attribution (WWA) and scientific partners in England, France and Switzerland. WWA is an international coalition of scientists focused on assessing possible climate change influences on extreme weather events. The team analyzed the recent record June warmth in seven Western European countries.


Friederike Otto, senior researcher at Oxford University, said the results are consistent with a warming planet in which summers are getting hotter and heat waves are becoming more frequent, intense and can come earlier or later in the summer season than before. “Heat can be deadly — especially for the very young and the elderly,” said Otto. “This extreme event attribution analysis makes clear that European heat waves have become more frequent, and in the South of Europe at least 10 times more frequent. It is critical that cities work with scientists and public health experts to develop heat action plans. Climate change is impacting communities right now and these plans save lives.”


“Hot months are no longer rare in our current climate. Today we can expect the kind of extreme heat that we saw in June roughly every 10 to 30 years, depending on the country,” said Robert Vautard, a researcher at the Laboratory of Climate and Environmental Sciences (LSCE). “By the middle of the century, this kind of extreme heat in June will become the norm in Western Europe unless we take immediate steps to reduce greenhouse gas emissions."