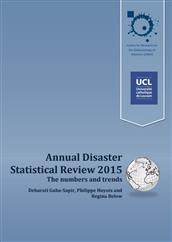 The 2015 annual review of disaster figures based on the EM-DAT database outlines information about the EM-DAT International Disaster Database, its definitions, criteria and content; asks: What did 2015 bring? How different was 2015?; and provides regional analysis on Africa, the Americas, Asia, Europe, and Oceania.